If you have any old photographs or stories of the Clevedon Long Swim, please get in touch.

With the development of the sea front in the 1820s, Clevedon visitors and residents were able to take part in the new-found pastime of bathing off the local beaches, when the tide allowed. In addition, Mr. Samuel Taylor built the Marine baths in 1828/29, on the site now occupied by the bungalow next to the Royal Pier Hotel. The terracing of these old baths can be seen looking inland from the Pier 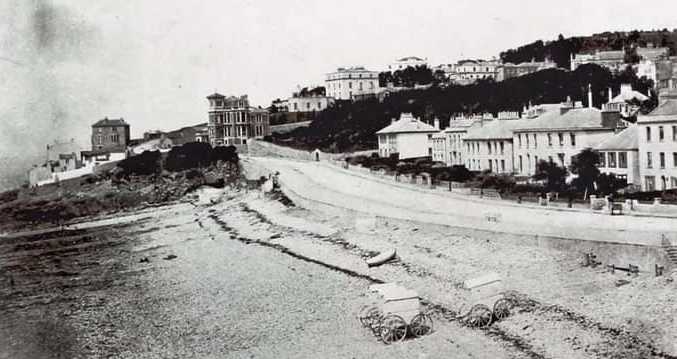 The National Library of Scotland Digital Resources page has uploaded various old maps of the UK for people to access. It is a fabulous resource and well worth exploring. We like the side-by-side viewer option, which allows you to examine a map in a split screen viewer. The image opposite shows today versus a map from 1873-1899 and shows the location of the old marine swimming baths which were located beside the The Pier Hotel in its hey day. 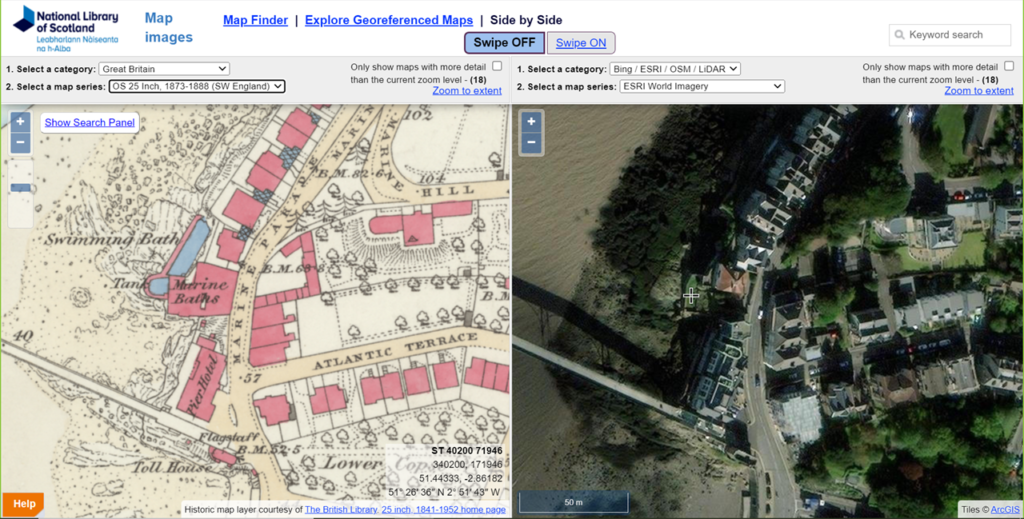 In 1876, the Marine Baths were replaced by Mr. John Vickery, on the same site.  In addition to these facilities, visitors could use the new Hydropathic Hotel, which stood on the site the Edgarley Court Flats in Wellington Terrace.

At the Local Board of Health meeting on 6th September 1876 a letter was read from Mr. Thomas Lilly complaining that bathers from the new baths were daily climbing over the wall and bathing in the open sea, causing a great loss to him by takings from his bathing machines falling off in consequence. It was also stated that persons using these baths often indecently exposed themselves to the view and annoyance of people using the pier. The Clerk wrote to the owner (Mr. Vickery) to remedy this by erecting screens.

Swimming activities became very popular and sometime before the 1914-18, led to the formation of a club called Clevedon Aquatic Sports. They ran regattas mainly off the Pier beach, where rafts were moored to use as starting points for 100yd and 70yd races, plank and shovel races, and a raft for boxing matches where if one boxer was getting the worst of a bout, he could dive off! Local boatmen towed a plank with a surf riding competitor sat astride, and “walking the pole” also featured, with the pole tethered off the rocks adjacent to the pier.

Two silver trophies were donated to the Clevedon Aquatic Club to present to the winners. This marked the start of today’s Long Swim. Keeping with tradition, these trophies are only presented to “skins” swimmers i.e. non-wetsuit 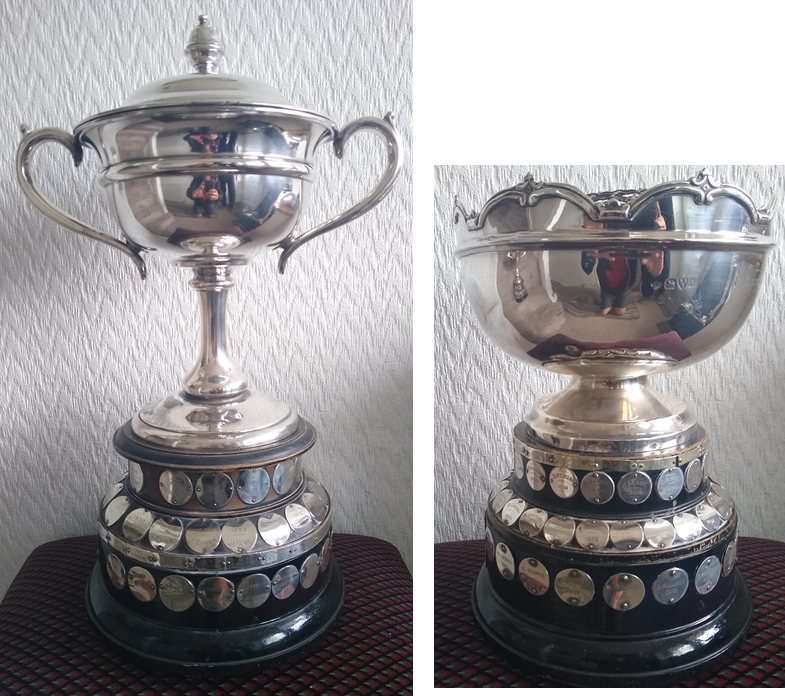 Due to bad weather coming in several events had to be postponed for a week, one was ‘cock fighting’ held on the raft and surf riding.

Mr Nutting promises a cup next year for the Ladies Long Swim, and Mr J Rich offered one for the Men.

Motor boats were lent by J Rich, W Gibson and Captain Rowles. Rowing boats were loaned by various boatmen. This was deemed a well carried out event and we look forward to the opening of Salt House Lake next year.

On January 15th 1929 a meeting was held at the Royal Pier Hotel of interested parties, and Clevedon Amateur Swimming Club (CASC) was officially formed. Their brief was to promote swimming, organise galas and take over the long swim from Clevedon Aquatic Sports.

The facilities in place at the lake allowed CASC to apply for affiliation to the Amateur Swimming Association, (ASA), Somerset ASA (SASA) and the Western Counties ASA (WCASA). These affiliations meant that many West of England Championships were held in the Marine Lake and with prestigious officers such as Sir Charles Miles Bart. and Col. Sidney Keen D.S.O. the Club started off on a firm footing. 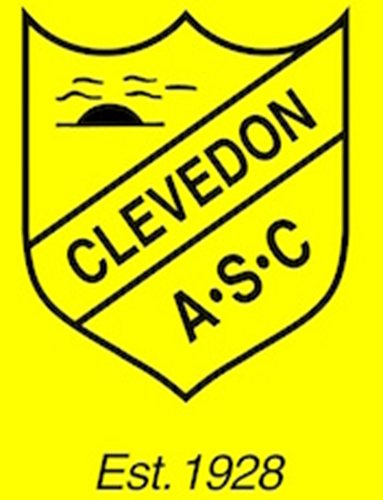 The Long Swim course was originally from Ladye Bay under the pier and finish on the beach. Around the end of the 60’s, the course was changed to try and attract more spectators. The new course was across the bay on the incoming tide, starting about 2 hours before HW. Men and boys started level with St Andrew’s Church, ladies and girls started beside the lake pumphouse. The race finished at the pier, the winner being the first under. On spring tides, swimmers would be well up towards Ladye Bay before they were safely gathered in a rowing boat So, on a really big tide, the faster flow it is reputed some swimmers were finally recovered as far up the channel as the Pilot school. The fastest recorded time was just 9 minutes. The course reverted to Ladye Bay trip when the Portishead Marina opened in 2001 and all the large boats moved from the Clevedon Pill.

Swimmers were rowed out on one of two boats: The Elizabeth or The Nancy Lee, which were used on alternate years to take the swimmers to the start at Wains Hill. The Elizabeth owned by Mr Fry, who was usually assisted by Roy Lovelock, did pleasure trips along the near coast from the slipway. The Nancy Lee was owned by Derek Bird, who had a garage and a small night club behind what is now the Moon and Sixpence. There was a plaque on the boat regarding its assistance at Dunkirk. Unfortunately it was wrecked in the storm which also demolished the Club’s changing rooms at the Lake and other boats kept at the Pill.

Below are a few newspaper articles kindly provided by Rita Gregory

Rita loved swimming and was a strong swimmer from an early age, first winning the women’s Rose Bowl trophy in 1950 aged 13 and continuing to win it for an astonishing 18 times. Rita excelled at other sports too, winning diving and swimming events in Western Counties and Wales School Championships, and representing her college in  cricket, hockey, tennis, and badminton. Rita also coached many children how to swim, dive and life saving in Clevedon marine lake. Outside of athletics, Rita was an artists and piano player. Rita and her mum Joyce managed the marine lake from 1957 for 30 years. 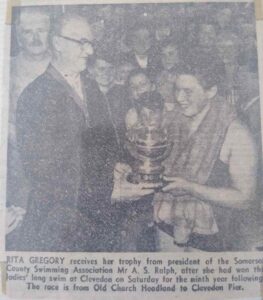 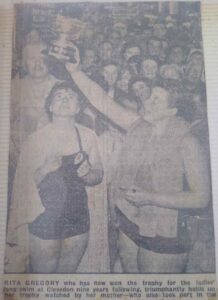 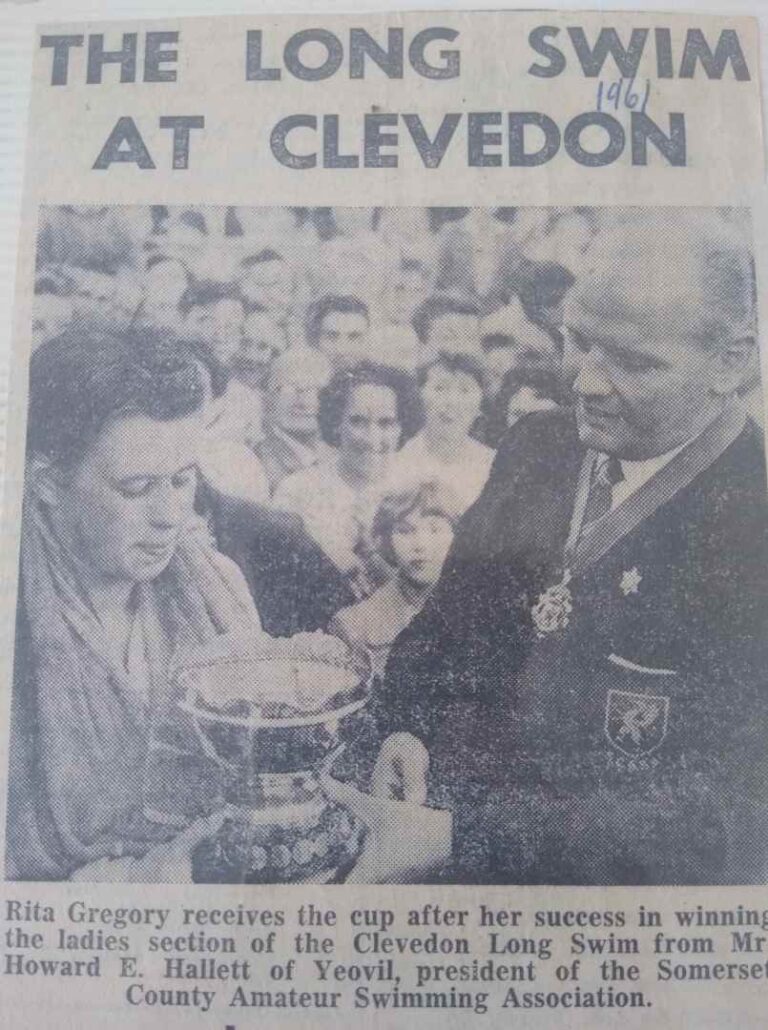 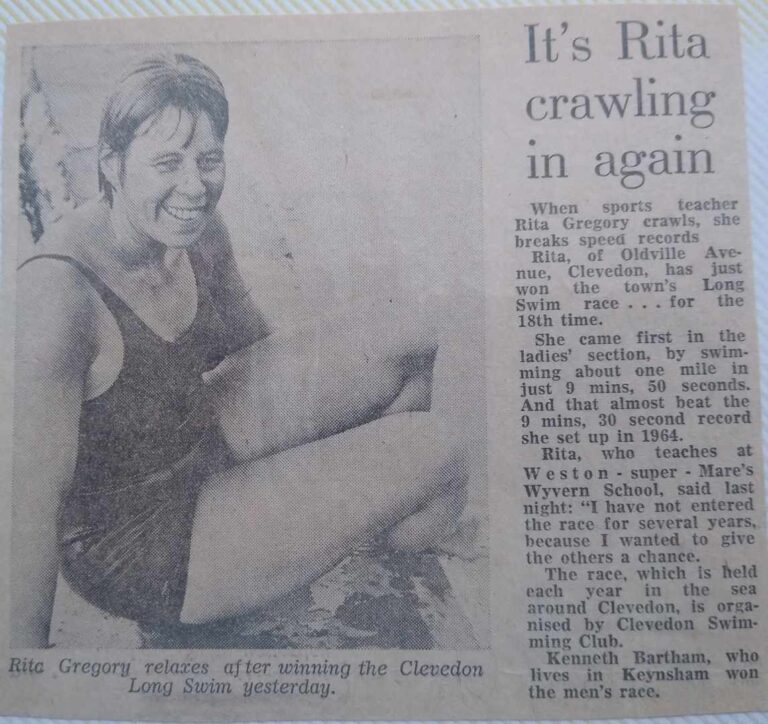 Alison Tucker (nee Ford) kindly lent her childhood scrapbooks containing memorabilia of her swimming exploits and many successes. These included newspaper cuttings and photographs covering the Clevedon Long Swim between 1978 to 1982 when Alison won the senior ladies Rose Bowl 5 years running from the very young age of 13 to 18. The cuttings are reproduced in each of the following tabs.

Alison took part in her first Long Swim on Mon 1st Aug 1977. The swim covered 1 mile for women, starting at the lake pumphouse to the pier, and 1.25miles for the men starting at St. Andrew’s Church to the pier. Alison was the first junior girl and second in the women’s section. At that time, visitors were allowed to take part, but to win a trophy you had to be a member of Clevedon Amateur Swimming Club (CASA). 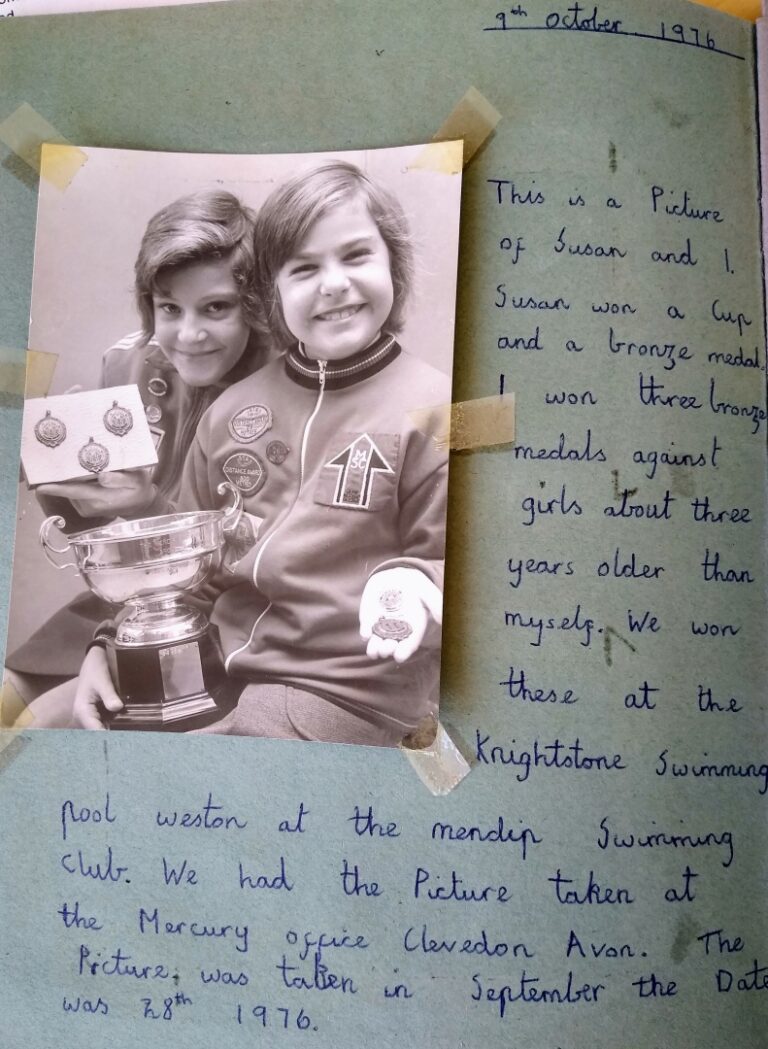 This is a picture of Susan and I. Susan won a cup and a bronze medal. I won three bronze medals against girls about three years older than myself. We won these at the Knightstone swimming pool, Weston at the Mendip Swimming Club. We had the picture taken at the Mercury office, Clevedon Avon. The picture was taken in September, the date was 28th 1976.

The long swim was the 50th and it was held on August 4th 1978and began at 7pm. The men jumped in first from Wains Hill and we began our swim after, from the pump house (marine lake). When I had completed the 1 mile course I found I was the second to finish out of 26 swimmers.

We had the presentation back on dry land and Cliff Hodge presented the trophies. I received the cup for the 1st Junior girl and 1st Lady. Afterwards we had our photographs taken. Then to finish the evening we had a buffet and Susan and I helped to take the food around. A very enjoyable evening. 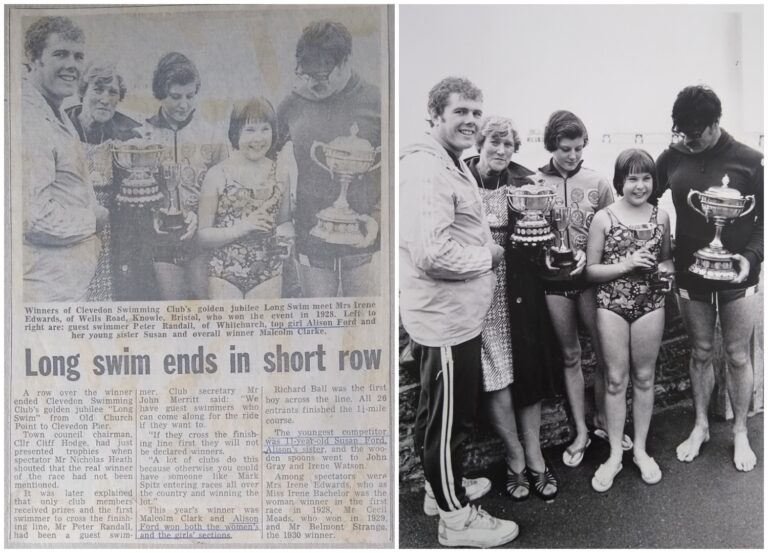 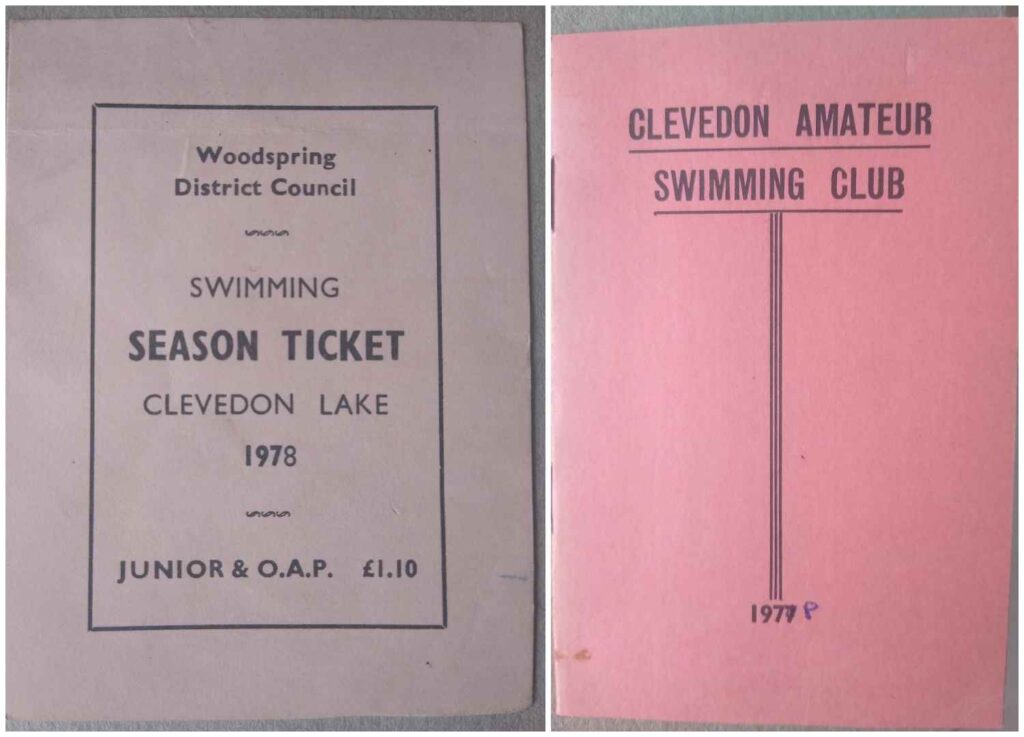 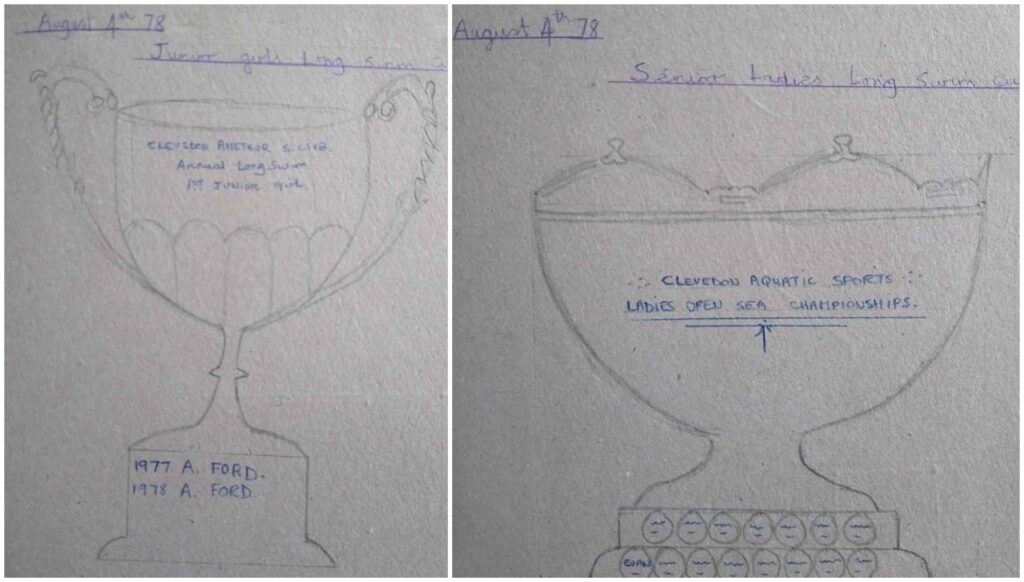 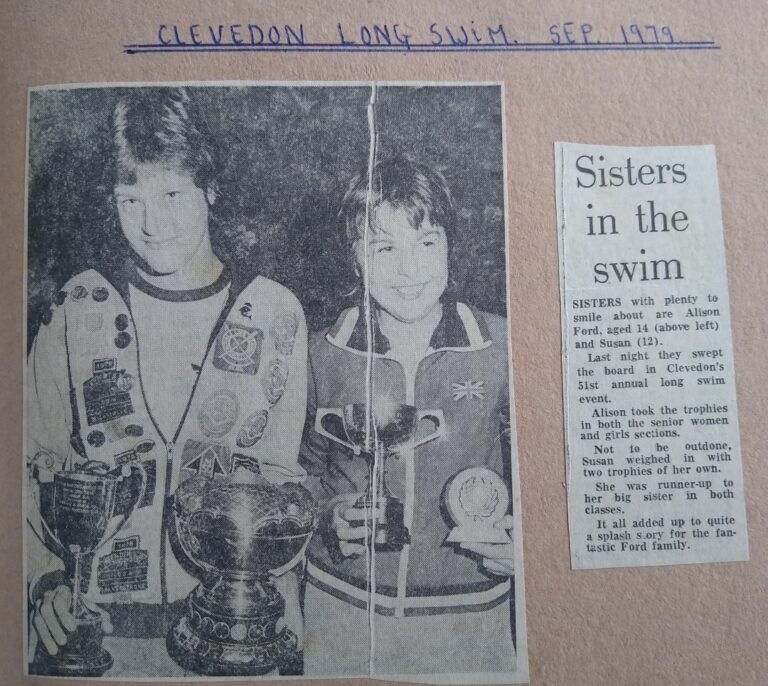 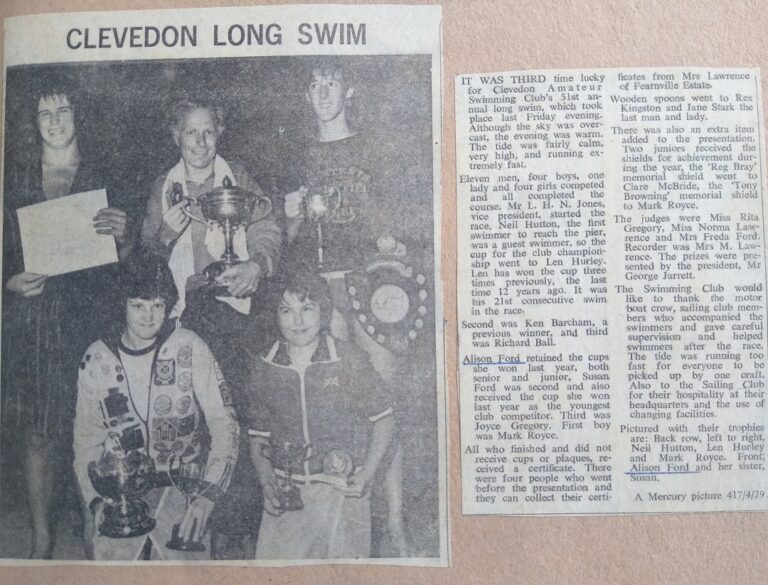 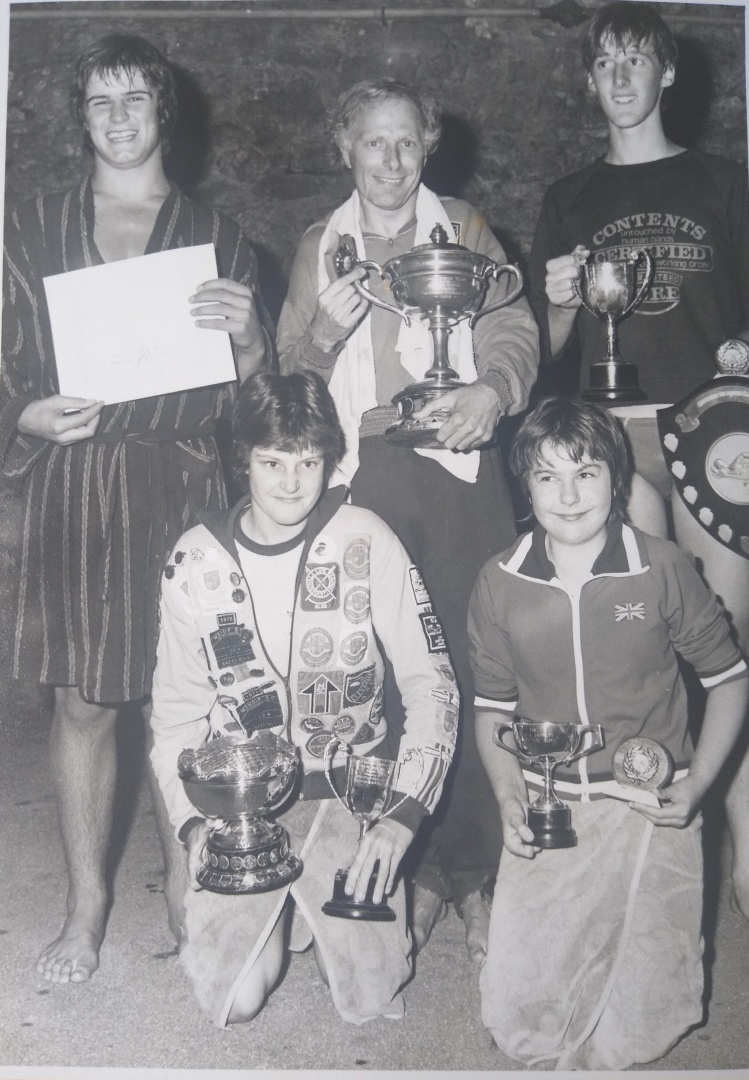 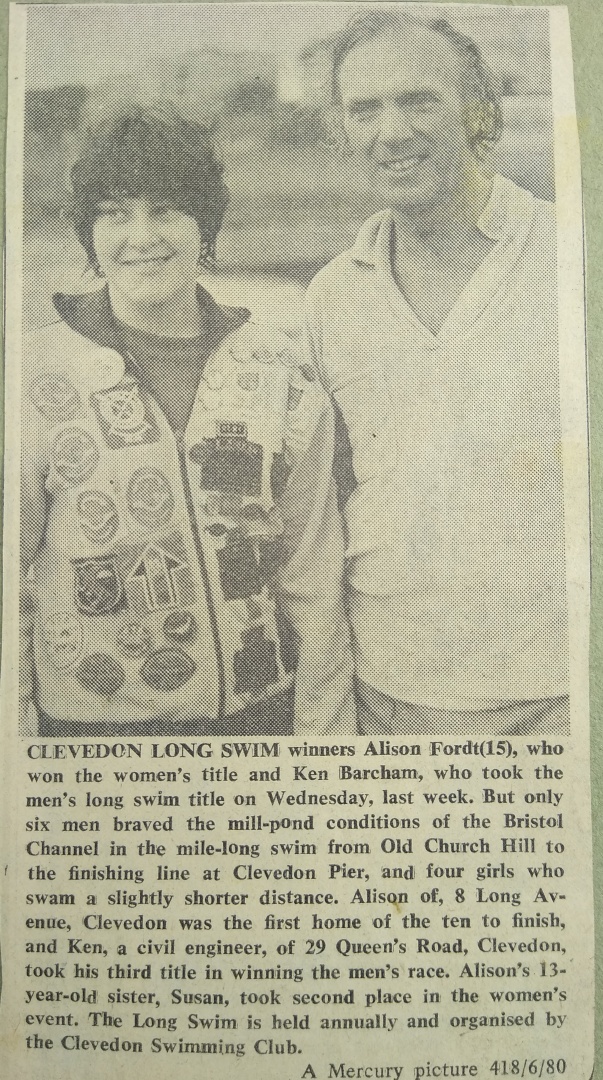 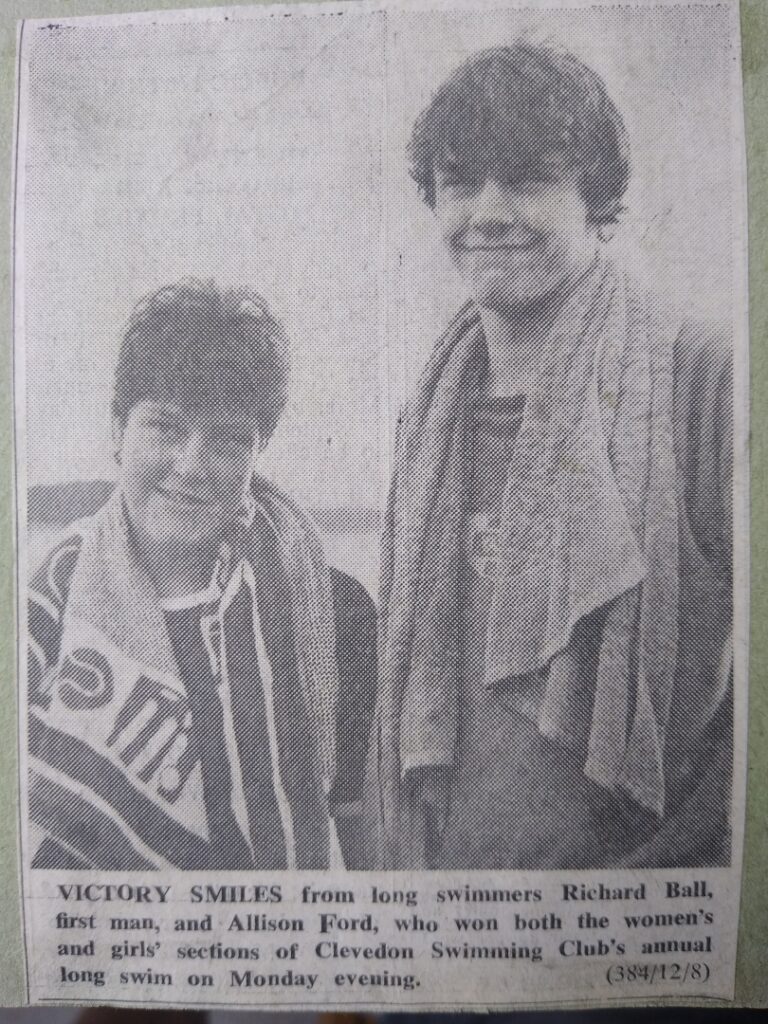 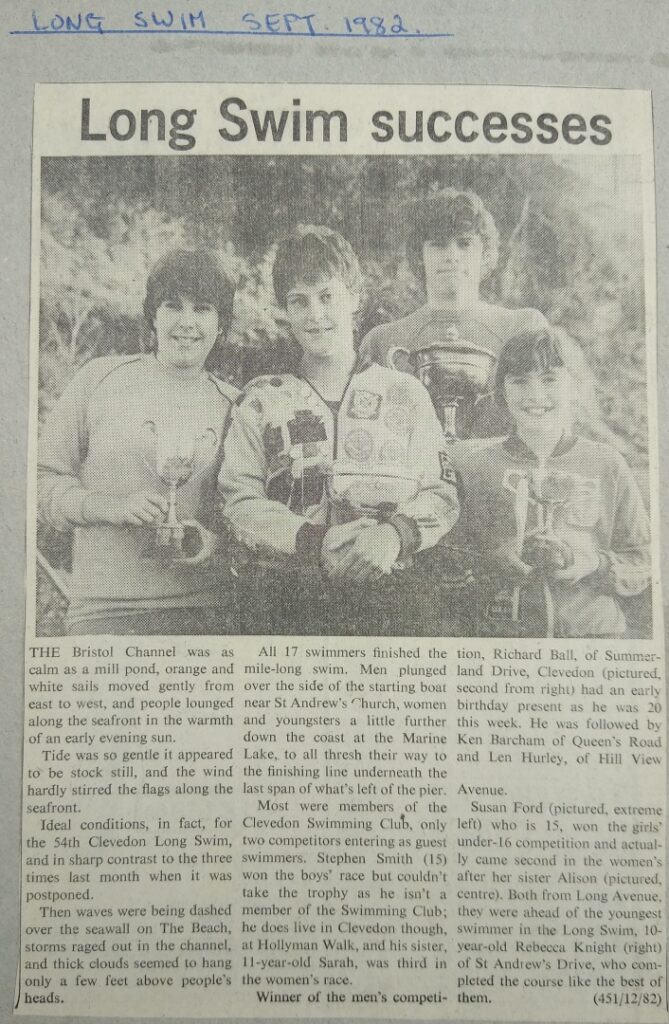 The amount of times I won the race differs from the names on the men’s cup as in the ‘90s the rule was only Clevedon Amateur Swimming Club (CASA) members could have their names on the cup as I think if the cup went to anyone unknown I think the organisers were worried about the safety and security of such a historic cup. The long swims I came first overall was in

I first did the race in 1992 when I was 14. At that time I was a competitive swimmer training every night with the city of Bristol swimming club but I lived in Clevedon when my mum mentioned about the very prestigious Annual Clevedon Long Swim. I was a complete “Newbie” at this race so had little knowledge of open water swimming. I remember the race was from St. Andrew’s church on Wains Hill to first under the pier. I remember very clearly the diesel fumes from an old fishing boat all the swimmers were crammed in while heading out to Wains Hill. Once in line with the church, we had our starters orders then we all jumped off the boat together into the Bristol Channel. I remember very clearly the first time I did this: as soon as I hit the cold water I could not breath, so I had to turn onto my back to control my breathing; this would later be known as cold water shock! Which proves even the strongest of swimmers can get this. The final stage of the race was of course under the pier where a member of the swimming club would register the race order. Once through the pier we had to be quick getting picked up by the boats as we could end up in Portishead with the incoming tide. We would then all be dropped off at the slip way where the Bristol evening post reporters would be waiting, and of course the trophy presentation next to the sailing club. Happy memories indeed.

Below are a few newspaper articles about other places and events featuring Clevedon swimmers. 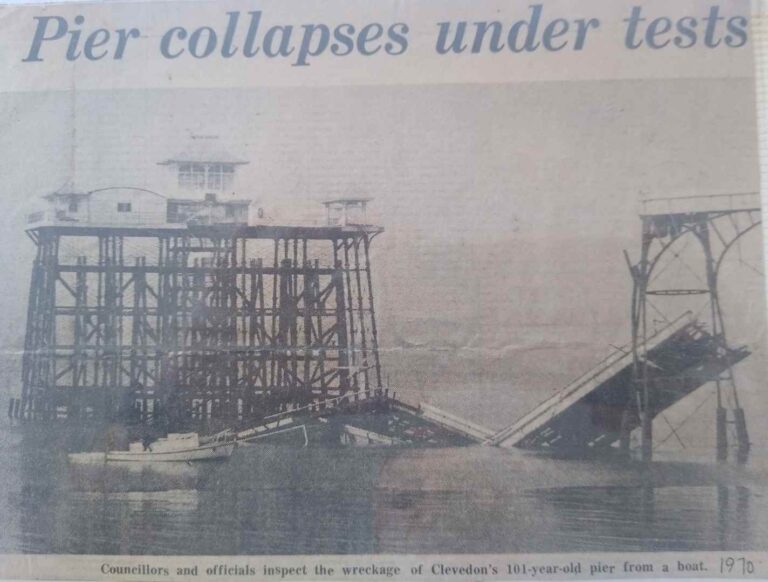 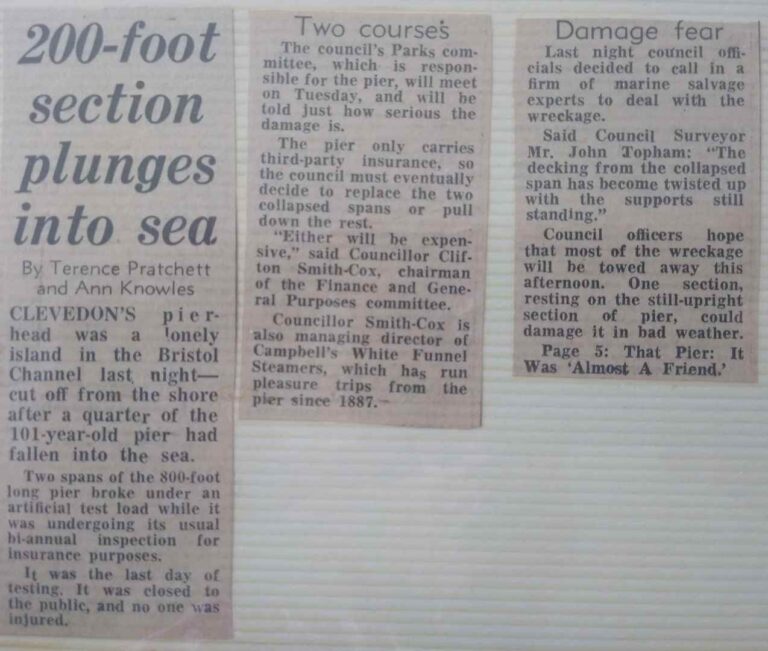 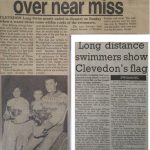 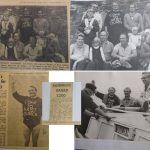 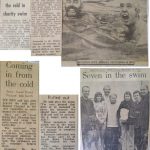 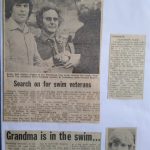 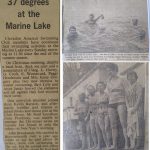 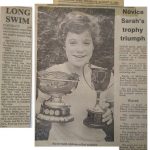 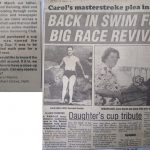 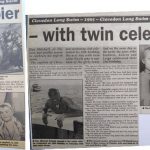 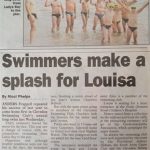 Thanks to Bob Turner for providing.